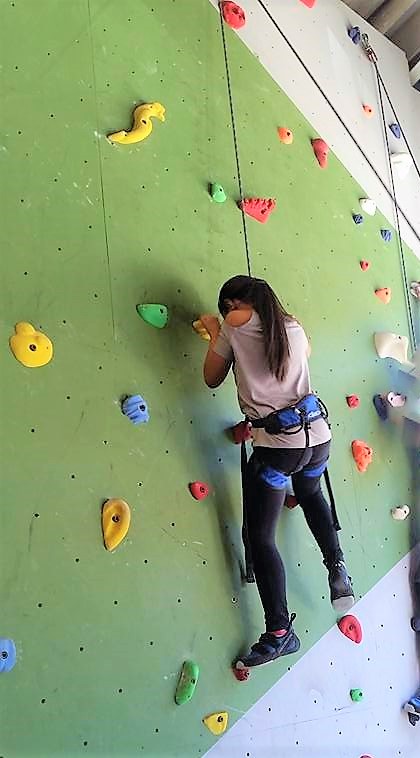 With Port Elizabeth being a small city, I get terribly excited when I discover new places opening up that could potentially entertain my kids (and my husband in this case). I was scrolling through my Facebook feed about a month ago when I stumbled upon a spot called Valley Crag. The ‘About’ section on their website says:

– We provide a safe and exciting climbing space for children and those just getting into climbing, to the hardcore climbing enthusiast looking to push their limits.

Some of you know that my youngest turned 2 recently.…and my eldest turned 9 last week. I decided months ago that I was officially all partied out! Addison has had a party every year of her life since she was born. So that’s 8. Joshua has had a party (some times more than 1, due to the fact that he’s a December baby), so that’s 5/6. Adam has had 2. That’s 16 parties….excluding anything done for myself, my husband and also the school party packs and treats. Mama has lost her mojo…..

I mentioned this place to Addison and she asked if she could please go there with a few school friends for her birthday for a chilled get together. NOT A PARTY….just so we’re clear. (But for ease of typing…I’ll refer to it as a party….) 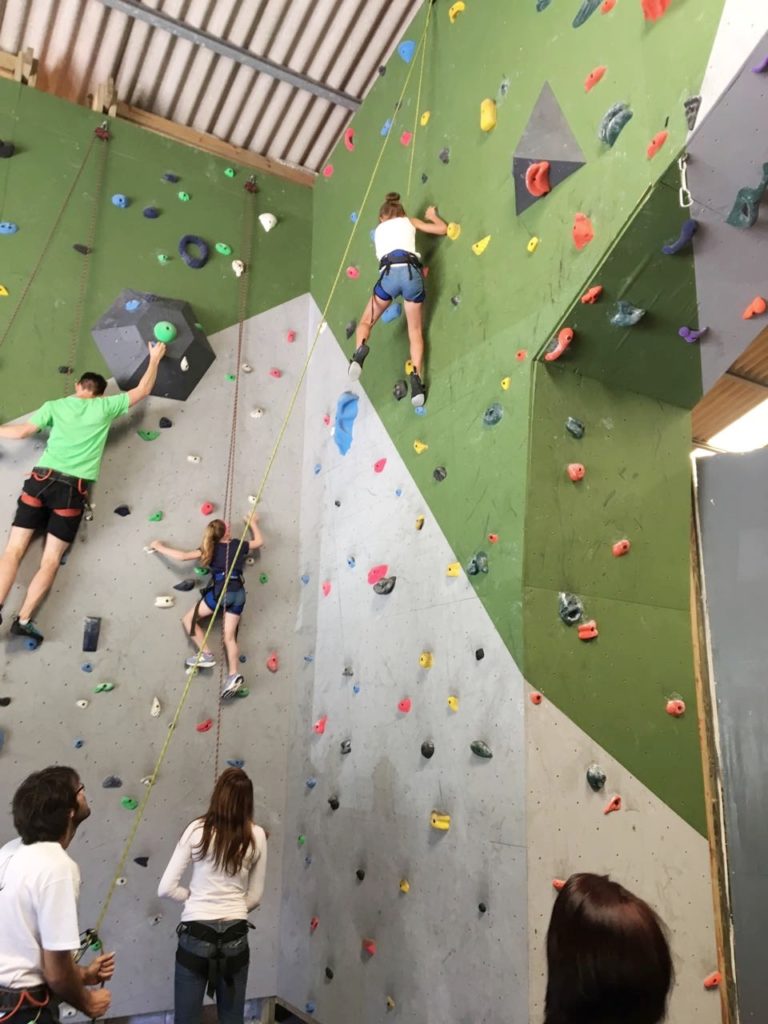 Before I get into the service and the actual ‘party’, I asked Ian a few questions.

1. Are you the owner of Valley Crag?

Yes… but I have someone coming on board as a partner now… so we can expand the climbing space through the whole warehouse. We have some exciting plans for the second phase of the build. Watch this space!

2. What was your reason or vision behind opening a business of this nature in PE? Is climbing a passion of yours as well?

There were and are many reasons behind opening the climbing centre. I see the benefits of climbing and I want to share them with my community. From a children’s perspective… climbing is so good from a developmental point of view, physically and mentally. I wasn’t necessarily “built” well for traditional school sports (like rugby), and climbing presents an opportunity for children that may not “fit” well into those sports offered at school to excel and even go on to represent their country. Climbing is a sport that requires one to push their limits and be both physically and mentally strong. I love the community aspect of climbing. Climbers tend to be supportive of one another and I want the climbing centre to be seen as a place where people can come and feel welcome, accepted and enjoy this rewarding activity.

3. Who is indoor climbing for?

Climbing really is for everyone. My eldest daughter was climbing her climbing wall at the age of 2… and there really is no upper age limit to climbing. We want to start a schools climbing league in the weekday afternoons. We see quite a lot of students and adults coming in the evening to train. Climbing is a really fun form of exercise… so if people are feeling a bit worn out by traditional gyms… they really need to give climbing a go.

Now on to the party…. First impressions when I ‘rocked’ up was that the place was smaller than it looked on Facebook. It’s big, but I thought it was HUGE for some reason. I was thinking…where’s the space?? What if it’s too crowded? Needless to say though, that my fears were unfounded. There was more than enough space for the kids and any other visitors that would walk in off the street. 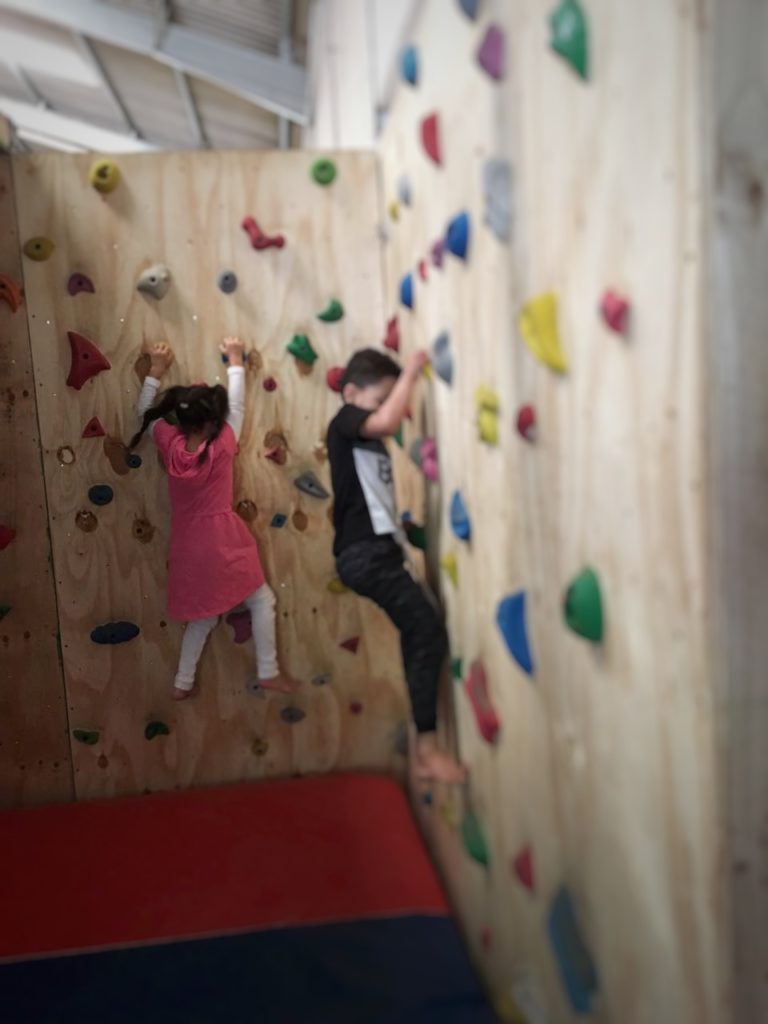 The kids started promptly at 1pm and they got their harnesses on and their climbing shoes fitted.  They then did some warm up exercises/stretches and also practiced on a little wall (their little kiddies/toddler section) as a warm up for what was to come. They then got started with Ian and his team assisting the girls and getting them started on the BIG walls.

After an hour Ian told us we’d take a break and sing to the birthday girl. We had brought in some pizzas and cooldrinks. Such a chilled day…… After about 10 minutes (though truthfully almost none of the girls actually took a break), Ian gave the girls a little lesson on how to make a knot of sorts. (I forgot what the knot was called). We also got a demonstration from a very talented young man who could climb horizontally upside down….like a real life Spiderman! It was super cool!!

They ended with some more climbing and at the 2hr mark the girls had to be told that it was time to go by their parents. Which I loved…there’s nothing better than knowing the kids had a ball of a time.

Something that really impressed me was that the staff were all so friendly and seem so passionate about their jobs. At any time, there is an instructor at a section of one of the walls, assisting the kids. They call the kids…they don’t stand around looking bored or texting on their phones. They push them and encourage them. They’re smiling and laughing. A lot of the girls kept aiming to go higher and higher with each climb, with the encouragement of the instructor.

Note: I’ve had a party where the pony lady doing the rides with the kids looked so miserable. She was a real buzz kill. So I appreciate people being enthusiastic for kids!

If you have kids that love being active….this is the place to visit! I cannot even express to you how much the girls enjoyed this experience. It was the first time for all of them and I thought after an hour, they’d be tired and ready to go home. Not the case. I am sure they would have gone on longer if  given the opportunity.

Another big plus? You also don’t have to worry about the weather if you have a party there!

Despite me having no mojo for parties, Ian and his team just made this so easy. It felt like it was no effort or stress on my part due to the relaxed and fun vibe. I’d definitely recommend that you check Valley Crag out for kids parties, or just a visit with your kids on a normal day or even for your own fitness if you’re into wall climbing! My husband literally was dying to climb himself on the day. He swore he’d go back for his turn.

Ian and his team ‘rocked’ for sure 😉 Click here for the website for all the information on what they offer.

You can also find them on Facebook over here.

Is this something your kids would be in to? Have you been indoor climbing yet?

The meaning behind my blog's name #30DayBBlogChallenge 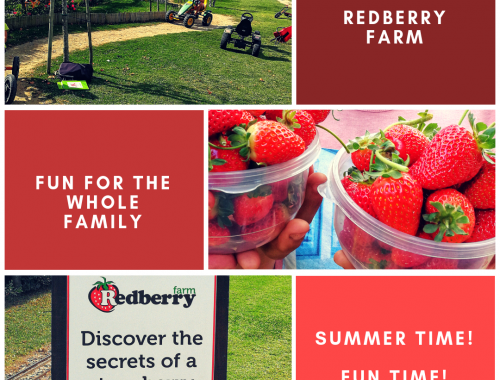 Schools out…..heading to the Garden Route and need ideas for the kids? {Redberry Farm}

10 Random facts about me #30DayBBlogChallenge 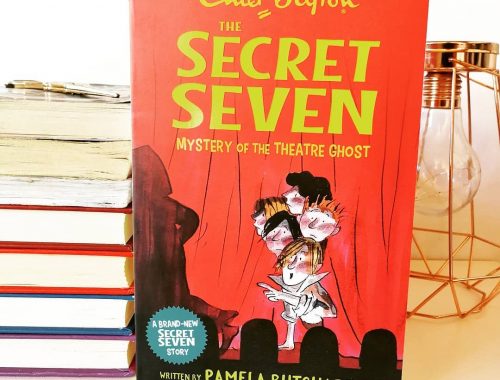 New reads for your Preteen (and teens)